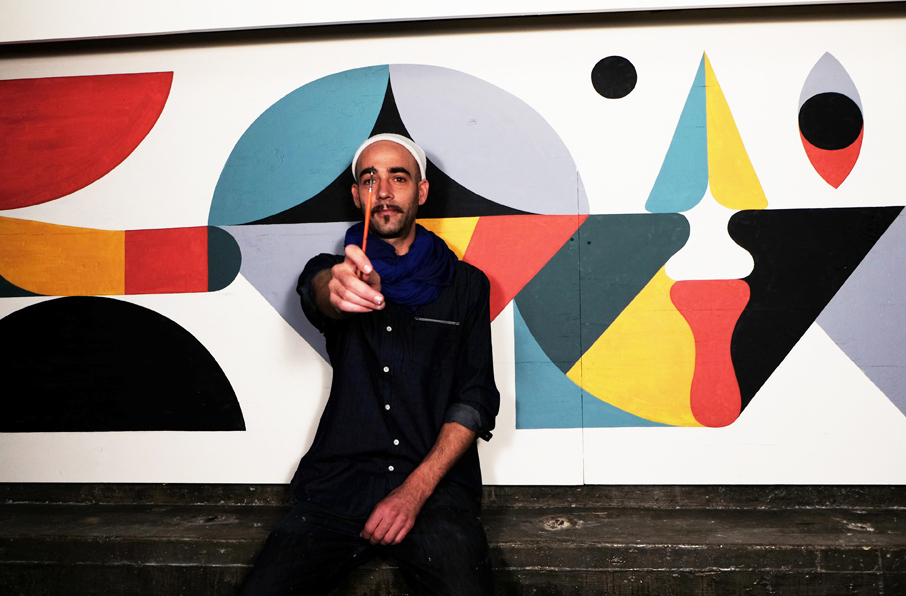 While I was in Newyork, I’ve been proposed to realize an indoor mural for a great Mexican restaurant in Soho. I was just coming back from Cholula, a town in Mexico litterally built on a pyramid, on which was then built a Church, over which I seen a large rainbow while I was painting a Jaguar. I was there, on the otherside of the fence, at the frontier of the ancient Temple.

So hopefully, in Newyork, I’ve been able to create a colored version of the jaguar previously borned in Mexico.

Close to Puebla, in the inside of the Mexican land, stand this place, surrounded by three volcanos, home of San Pedro, hosting a large observatory, wright on the base of the largest pyramid regitsrated on Earth, for now. Deep energy brought many people there, Many layers of beliefs in a place bound to the Whole timeless Universe. I arrived there almost by chance…met Mil Amores and deicded to stay a bit, talking about Life in and out, about vibration, about our experience here.

I enjoyed my time there, I thought it was beautyfull. 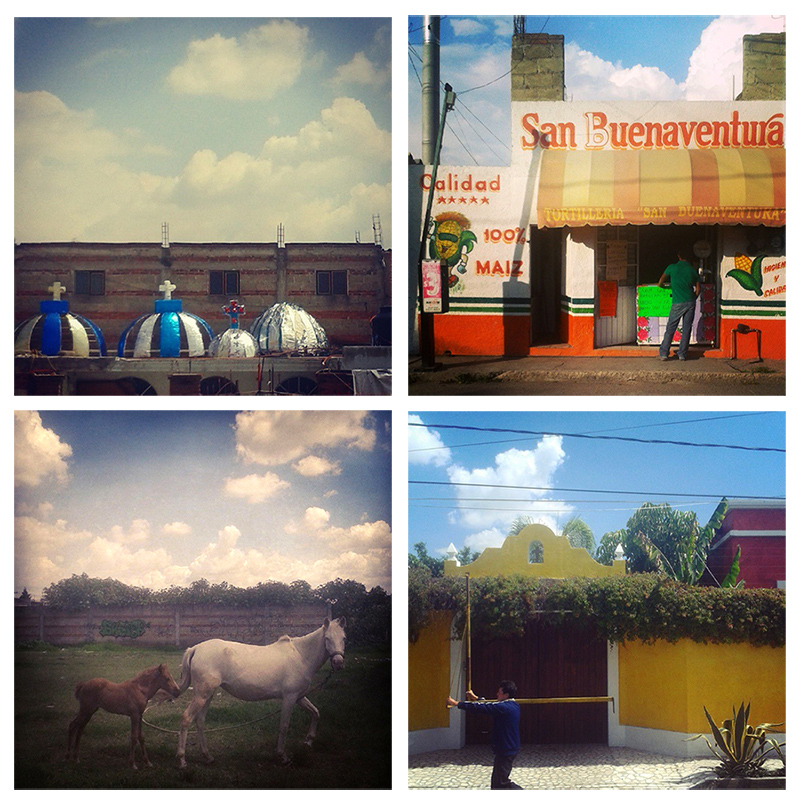 CHOLULA. The town on the pyramid between two active volcanos. Mexico 2014 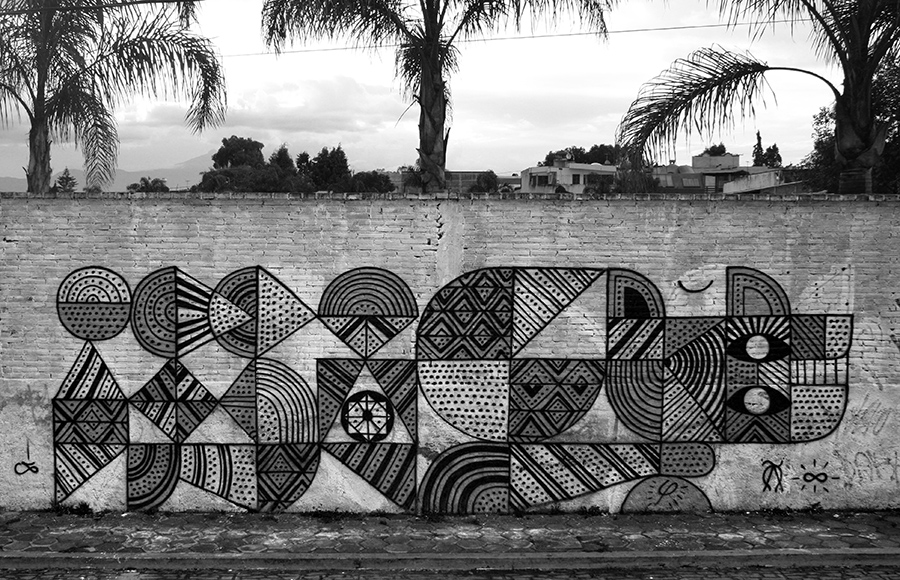 As I was standing in front of the wall, I knew I had to paint a Jaguar…I didn’t really understood why at the moment, but I felt like it was the only thing that would belong to here.

While procesing , in thé early afternoon, I could see the clouds of the rain season coming to us…they say it rains everyday at 6pm…so I was a bit in a rush, protecting my head with my large blue scarf, hoping the water won’t fall. But it did rain, sofly, then quite roughly, but not for long, and I’ve been able to accomplish my task….This day brought me sun, water, a huge rainbow over the pyramid, a black feather someone gave in a suspended time, and on top of it I met a kid, sitting in the basket of his father’s bike, who wanted to offer me the black rabbit he had under his shirt. I felt blessed, I smiled and was filled.

The sentence above the visual «TU Y YO, NADA COMO TODO, SOMOS UNIVERSO» means «YOU & I, NOTHING SUCH AS EVERYTHING, WE ARE/IS ONE : THE UNIVERSE» 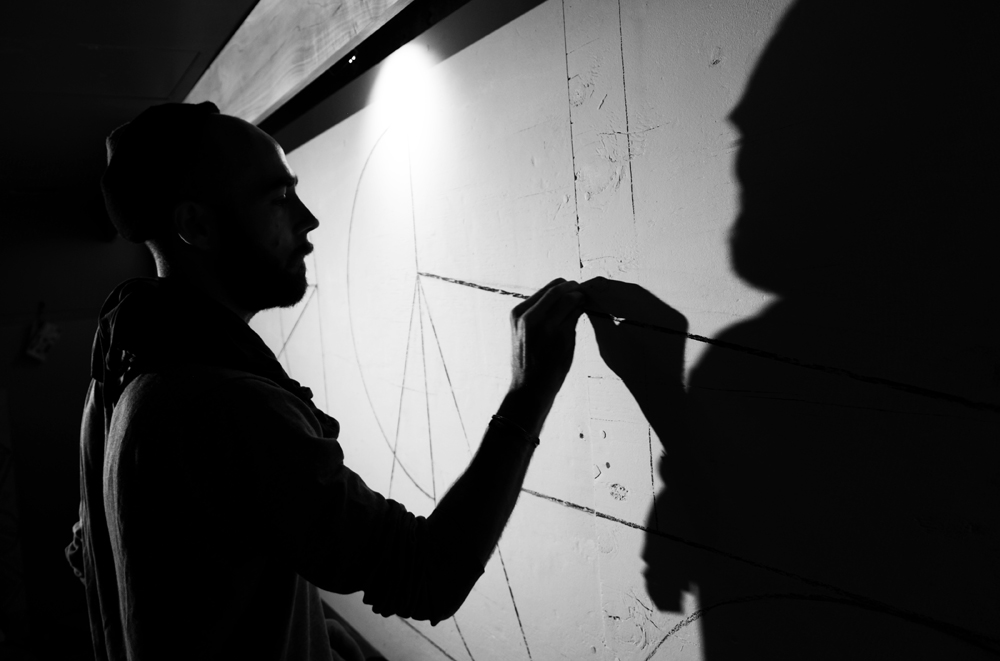 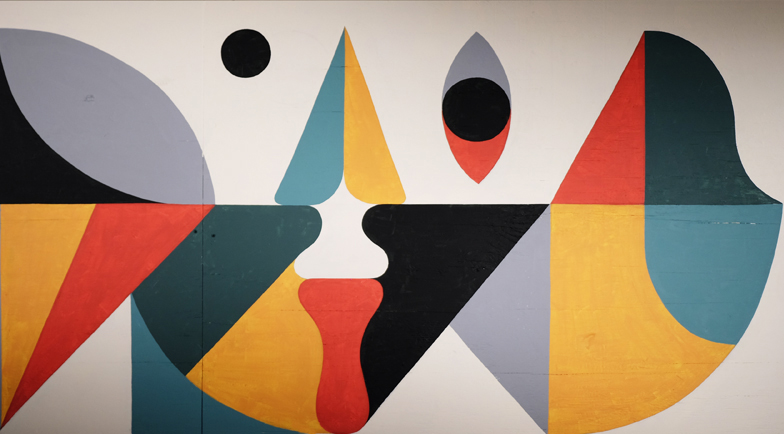 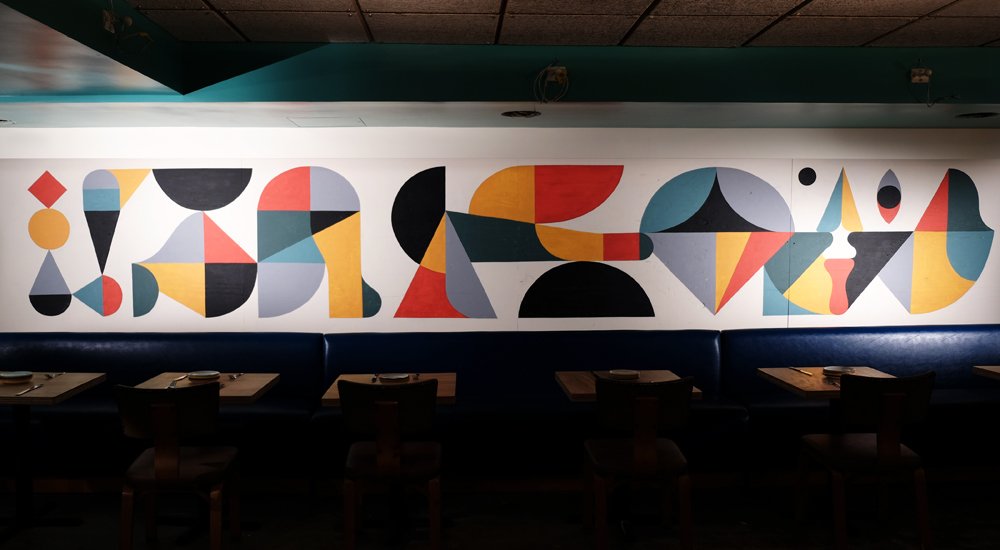 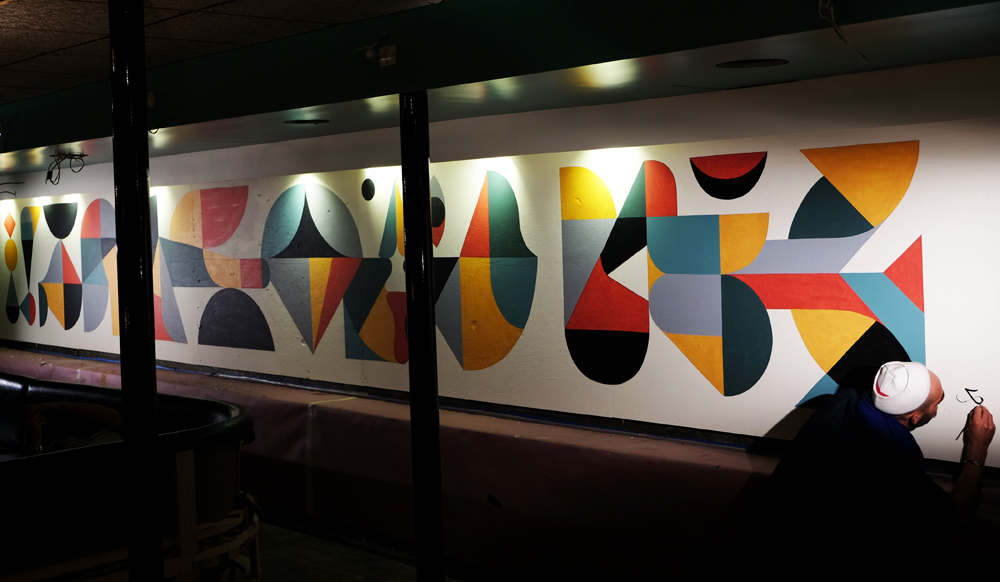 If you look enough time, you might recognize a «U» shape representing the tail of the jag on the extreme left of the picture. A reverse dark half of a sphère marks the bottom of the metamorphosing being. Under this shape, his leg kneels. He double his second leg as if hé was about to run. On the right of the first column you can see his harm laying over a reversed bowl. His hand holds the upper part of the sphere from wich a sort of diamond comes out. Behind the right colulm, there is his head who seems to be the face of a man. His eyes, though, are levitating. On the right of the picture, you can see an extension of his head, or is it his mask? in thé shape of a feline profile, spitting fire under the moon.