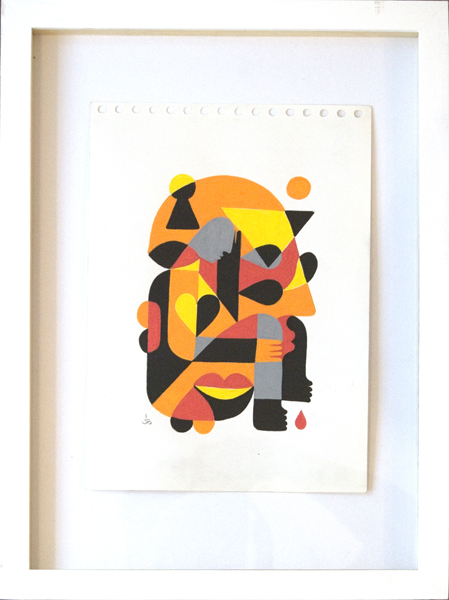 FROM DESIRE TO FULLFILMENT

These are two canvas i made after «El Spmet» that took me ages to do…. one mounth and a half repeating the same gesture each days, seing little by little the painting being born.
So I needed to get my hand and mind free for a wide…
Then i took a pen, and waited to see what will happen, what was i feeling after this long introspection…
I made a serie of 7 draws expressing human duality, or the way from doubting to acting, through hope.

From this serie of draws, were borned 2 first canvas of three. 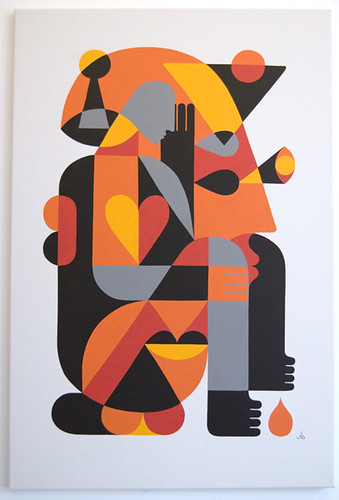 In this paint we can see a man sit with one hand on his right knee, the other one helding his grey head. His heart is right here, paint in yellow and red… Then, from one of his mask mouth drip an inversed heart, dark and bigger than his own one. The shade of the body and of the inversed heart is the same.

Behind his head, a keyhole – which he still don’t see yet. And around him his futur potential… We can also see a big orange profile, turned to outside, in communion with the universe and the cosmos representated by the triangle and the round. We could imaginate that the triangle is the funnel through what that round – or the global – the everything – could enter into the human being. One of his eyes is carrying the vision of the third, full of lights. 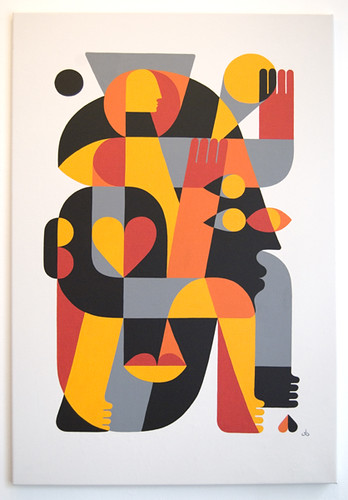 This canvas is following the first one. We recover the sitting man, with still one of his hand on his knee, but the other one didn’t hold his head anymore – which have been cut – but is rising to the sky, becoming the second hand of a second character (who is the same one but in a different space time). We see that this second character is standing up and walking. His left hand isn’t his shades anymore but is standing in the light. The triangle is prolonging his head – of a bright yellow. And a moon behind his head replace the keyhole – which mean that he finded the key !

The eyes behind him aren’t dark anymore but colored with a deep yellow, and the third eyes is entering the face.

The inversed heart is below, small, insignificant. 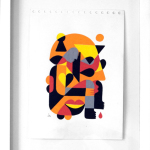 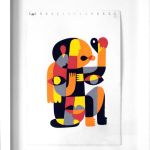 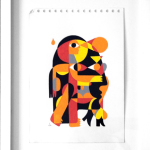 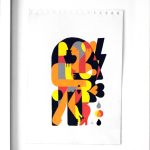