In june, Thanks to Lawrence and James, from Makasutu, I’ve been able to Live the Gambian experience. I had the chance to spend 15 days amon great humanbeings and artists such as Lawrence & Njogu, Roa, Tika, Bestever, Selah, Ricky, Rowan, Sydelle, and Jonx. 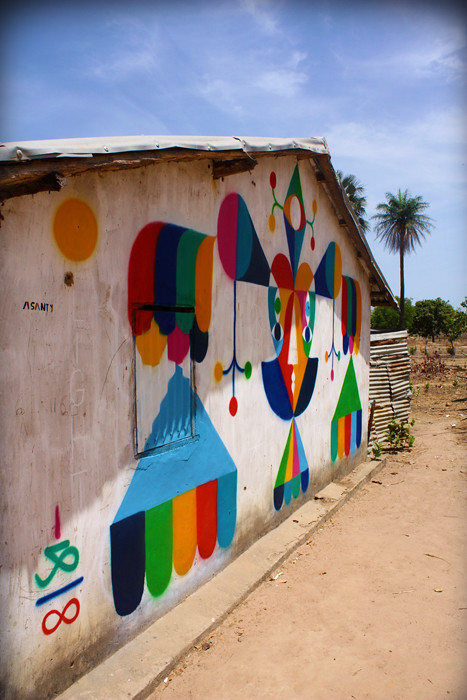 The first village we visit was named Macumbaya.

A small village in which everyone seems to be free, and everyhting seems to belong to everyone.

There i met mohamed, that became a brother. He showed me his village, his people, his culture.

At first, I was wondering about the point of me being there, sleeping in a nice bed facing the river, with fishes, rare birds and baboons visiting me, having for only mission to give Art.

I was asking myself if it was not better for  the people, to receive food, money, tools or infrastructures instead of just Art. So i had some talk with locals about that, about my doubt.

They told me they weren’t expecting nothing like this from me. They said they love Art. They were enjoying having the opportunity to meet someone from another world to share Life vision with.

They accepted me as a brother, and I felt like one. 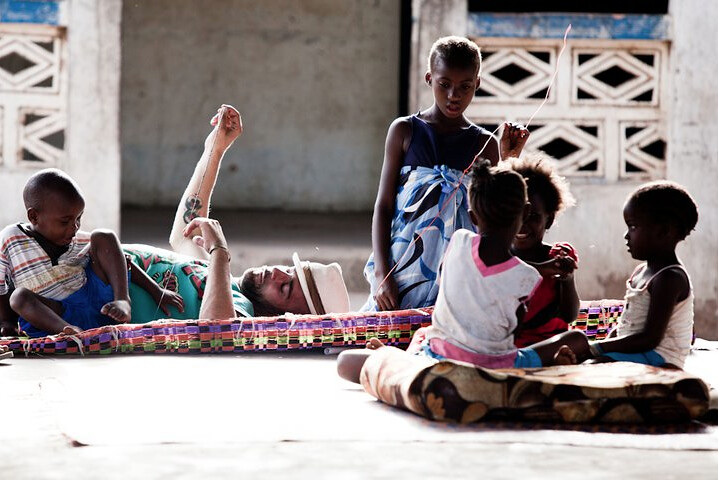 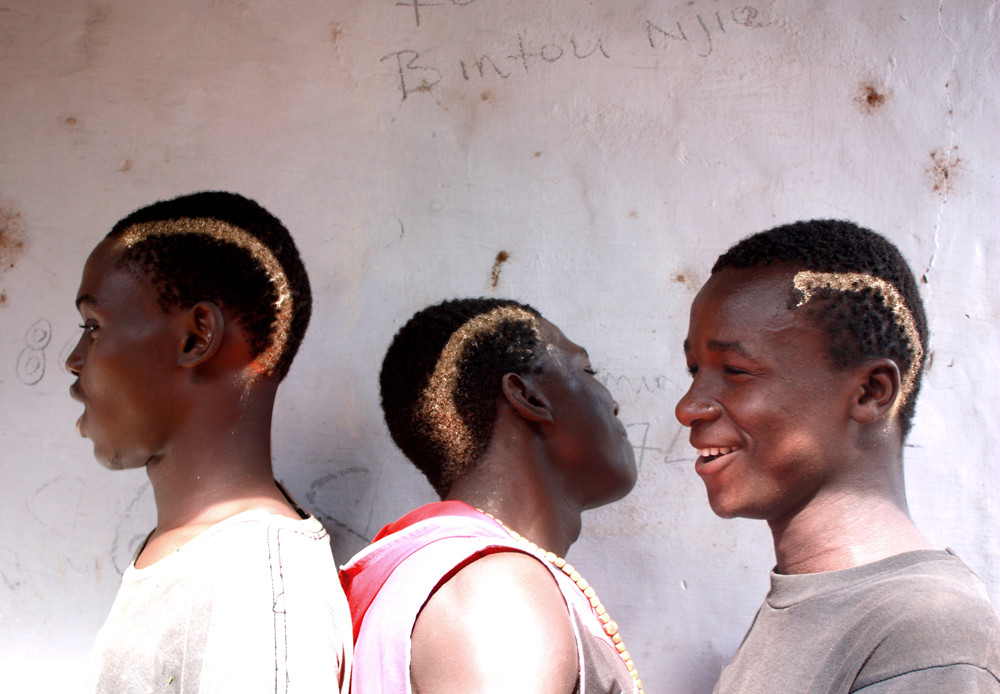 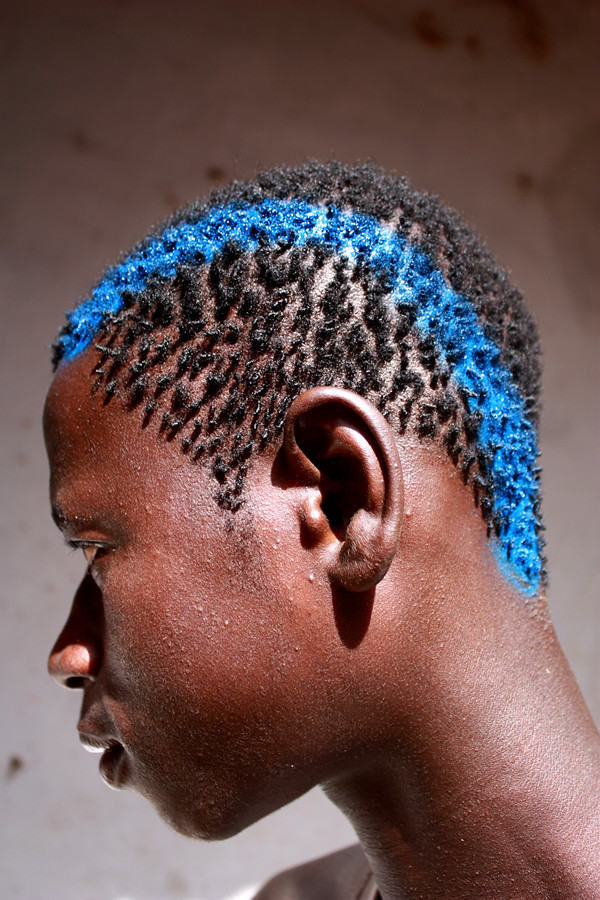 The great thing of the trip was that you could walk and choose to paint on almost anything (or anyone as you can see on the picture up, even if they just did it by themselves) since you could exchange a few words with the owner of the wall, and realize anyone was greatfull to recieve your Art as a gift of Life. 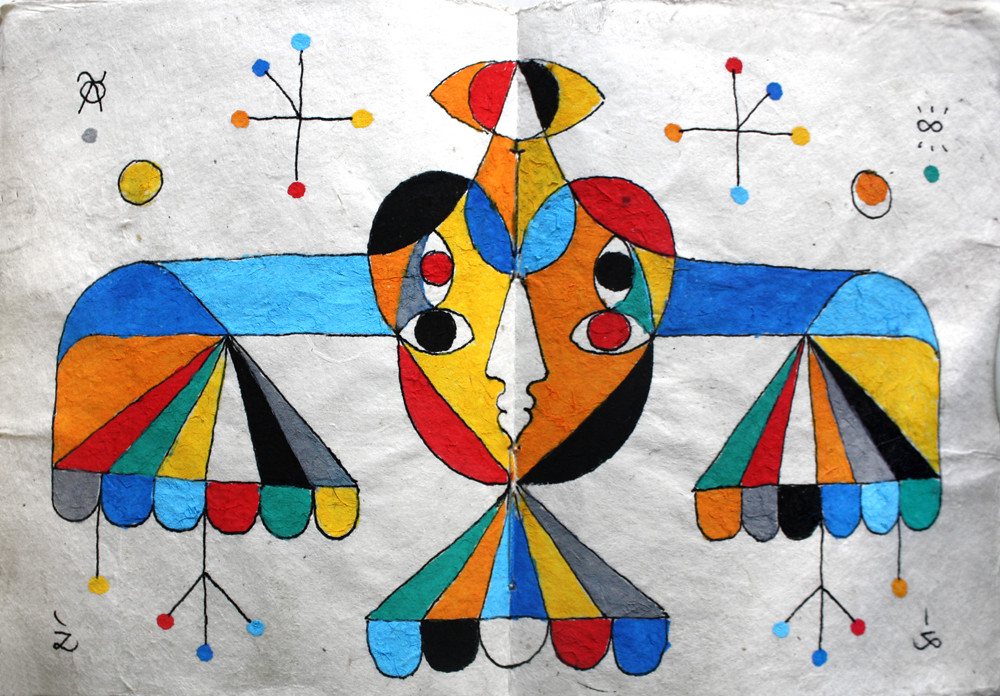 What I loved from the chat with them, is their consciousness. They all knew how good it is to live in peace, close to nature, and friends or family. They knew the real wealth is time. Being able to spend time as you wish, being able to let it go it if you desire to. Allowing yourself to open doors. To enter, or to let enter. They welcomed me in, and all what I’ve been fed by, came out on the wall naturally.

So i sat down, stared at the wall. I waited long enough to see the visual appear on the wall, through my mind. Going out of my soul in order to be brought on Mohamed’s friend compound. I didn’t even made a sketch. I just took the spray, and started. Then Magic happened on its own. I was just the hand in between. 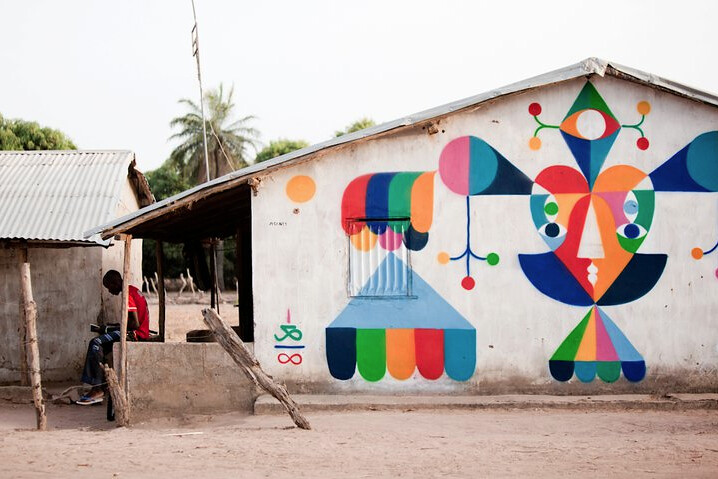 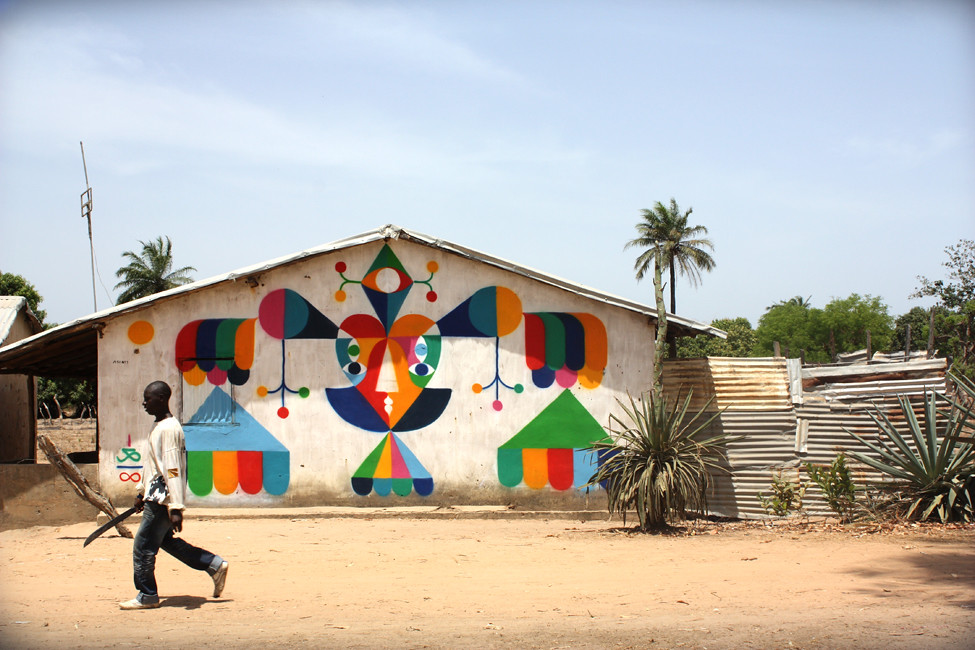 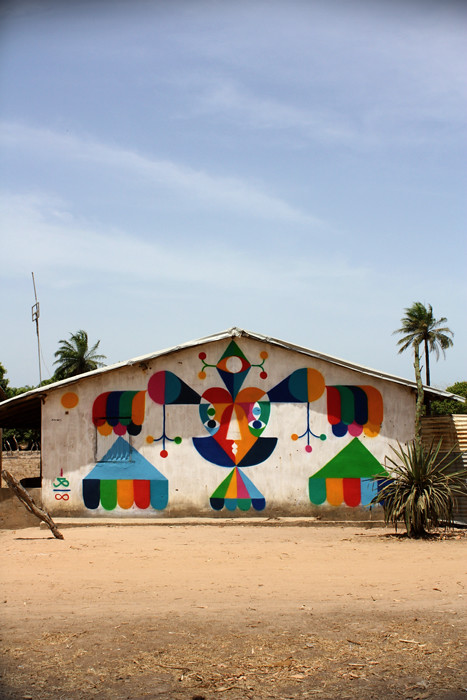 After a week in Gambia, working hard everday to spread peace, Love and unity all around, we took some time to discover the country. During the trip, we stopped in Brikama, in order to eat. There, I met a bunch of kids that also became some of my N’domas, my little brothers. 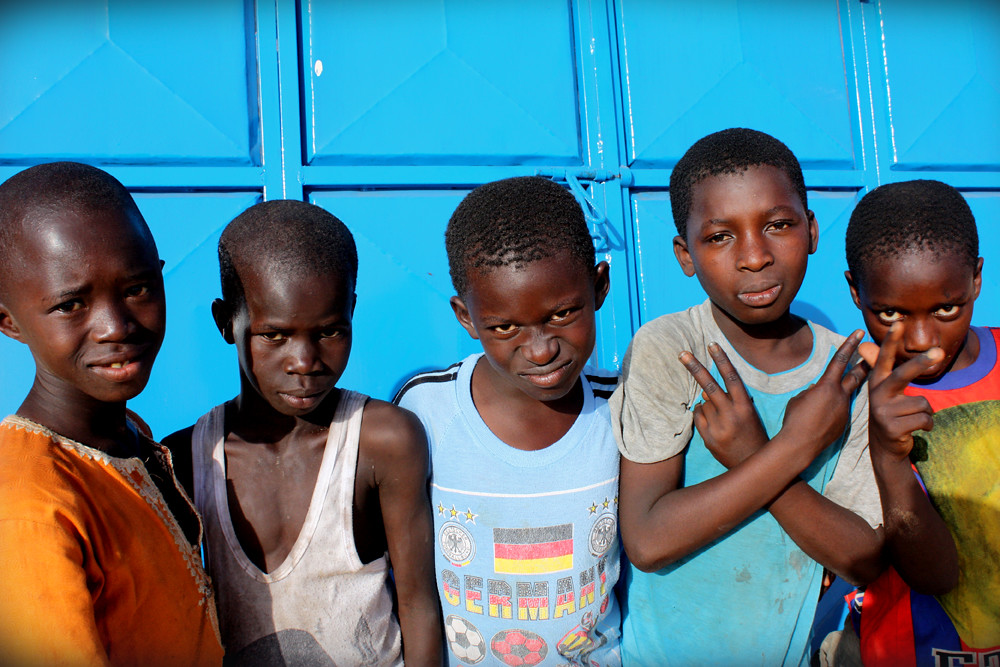 Once again i couldn’t gave them much but Love through will and action of creation. We first played a bit of football, then I explained them that no consumption products will come out of my leaves. After that, we all agreed i could offer them to draw something together, and i was really happy about the process and result. I think they were too. 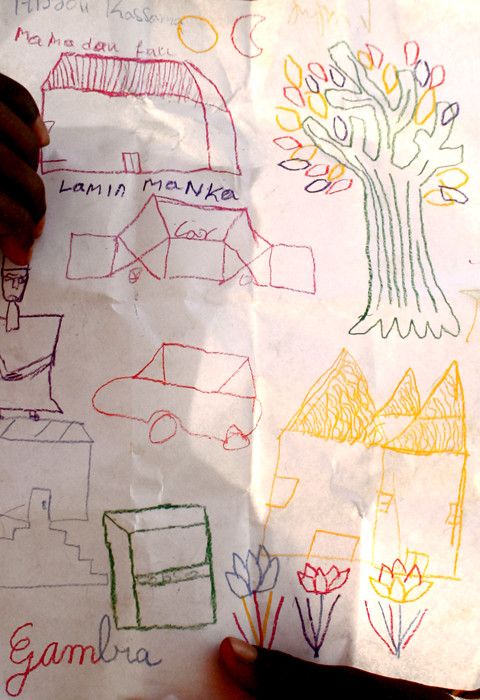 One of the kid stayed with the drawing, but i decided to draw some quick pieces, that i could give them. For Memory, and hope. For Love.

And these birds came out one by one, in group. Similar but diferent. Such as them. I hope they ll use their wings when needed. 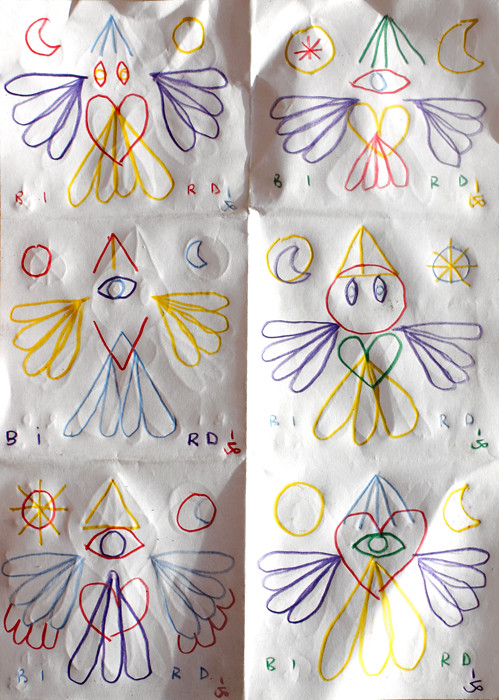 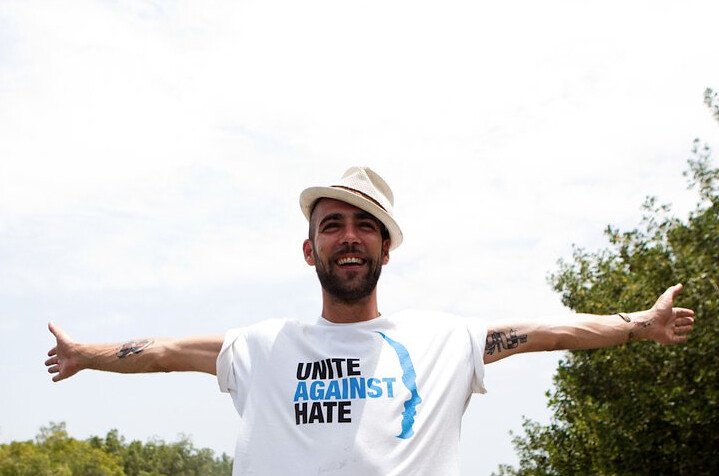