P e a c e  to you my friends, those I know, those I don’t.
After 6 months of traveling for Art and Life, I’m finally in a sort of holidays and take time to write a bit about my experience in Marrakech.
As I wrote before I spent 40 days having a residency at David Bloch Gallery, in the center of a country I love since longtime named MORROCCO. I had there the most introspective period(s) of my Life. 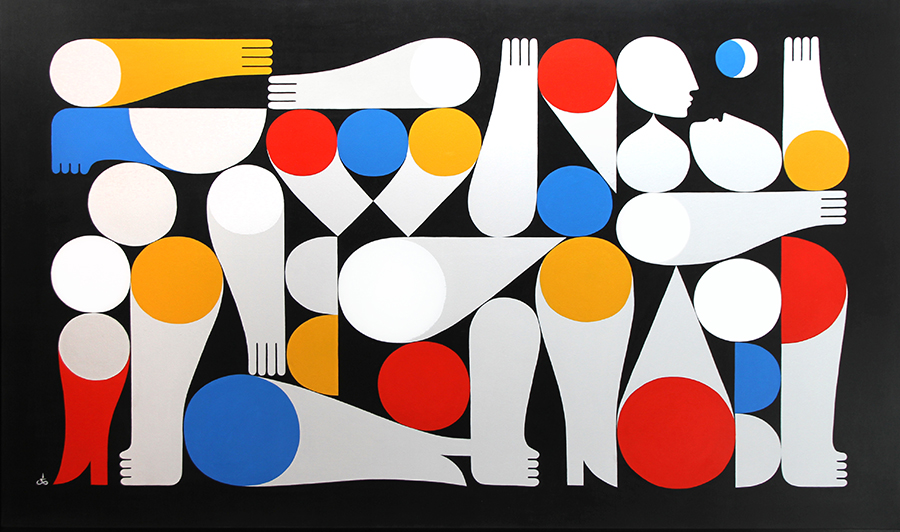 I’ve been knowing Marrakech for more than 15 years now… As some may know, It influence my path in many ways. Because of discovering other point of views, because I learn there that time is an ally rather than an enemy, and because it’s one of the most interesting place of Art considering the geometry has being used  for centuries to develop an amazing abstract figuration language, which obviously influence me a lot either it was consciously or not.

So I naturally started to dig a bit more around that culture, and I first focused my attention on the «Berbere» culture which is one of the most ancient and wise culture of North Africa. 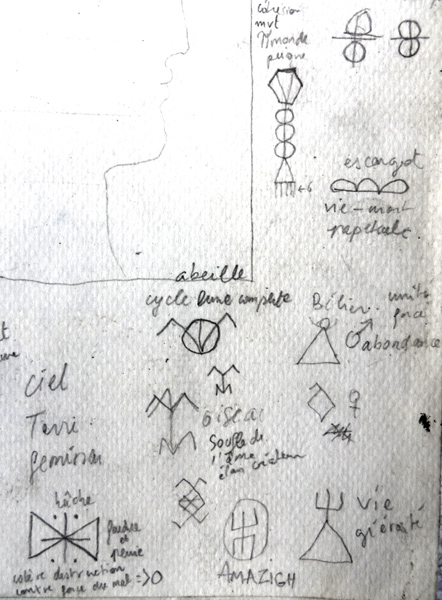 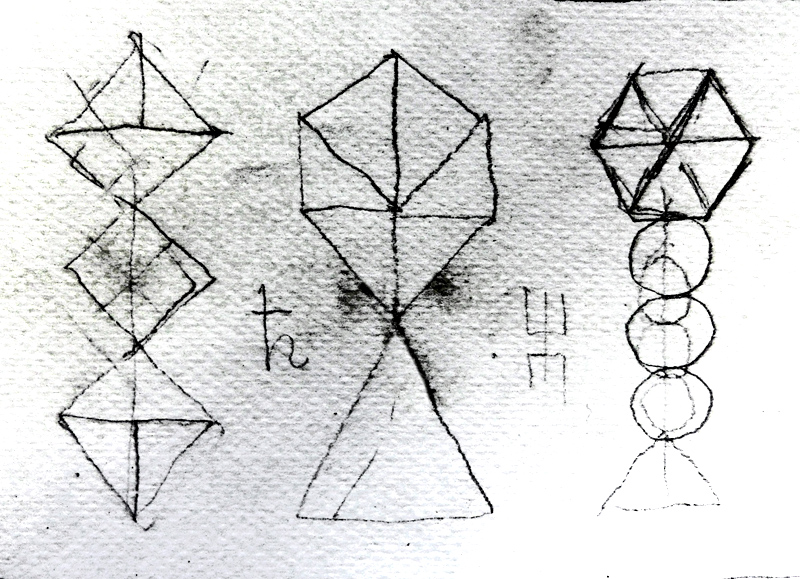 I choosed to use a declination of 3 of the letters. On that exemple, the first one is a comb, symbole of the Movement, which is one of my favorite concept, meaning also the power of cohesion, or unity. The second one is the tree of Life, the basement, and the last one is bound to the woman, and also to the snake or cycles.

I finally choosed to use 5 symbols, inspired of 5 of the letters of this amazing alphabet, making a pentagram blending the Woman, the Comb, the Tree of Life, the Snake and the Man. These words could have been the title of the canvas, but I choosed another name, inspired by a ancient Magic square I love  : SATOR, APERO, TENET, OPERA, ROTAS.

I finally choosed to name it » The Sower and the Wheel». Sator meaning the sower (Or the Creator), Rotas, the wheel (The Movement). Down here is the result. 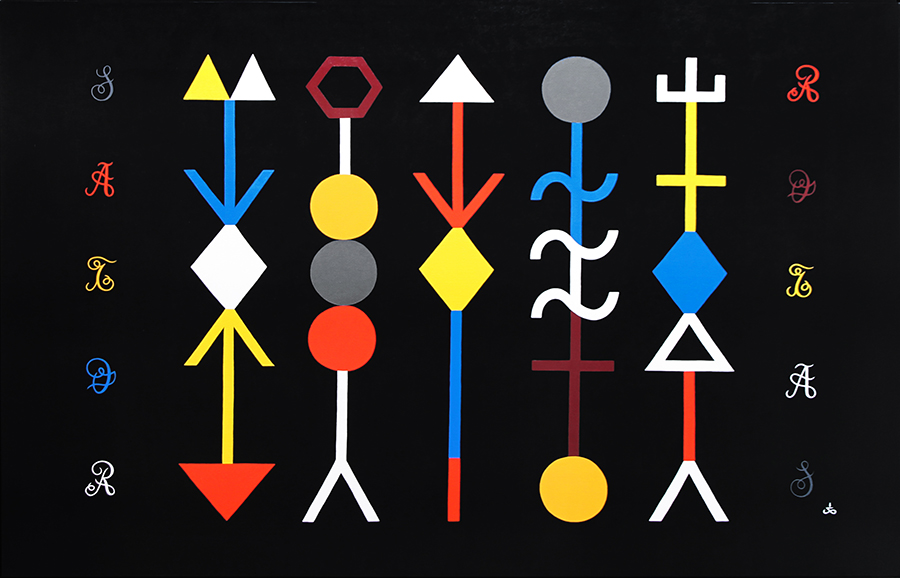 Diging around letters, getting to understand that each of the words we use in any of the existing alphabets are actually geometrical representations of a figurative element or an abstract concept, became really interesting to me. So I then studied a bit the numbers…not really study their story, but more trying to guess it by playing with them. I took the 7 first numbers, reflect them with symmetry and associated them to the symbol of the planet corresponding to them in the solar system, creating a roofless temple made of seven pilars. Each of them, beyond being a number and a planet, hold the letter of the main visible light that reach us : 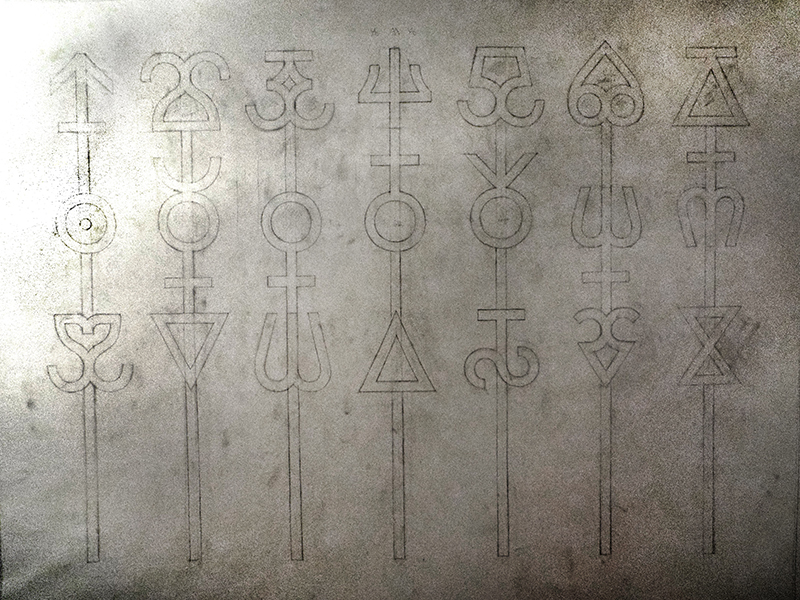 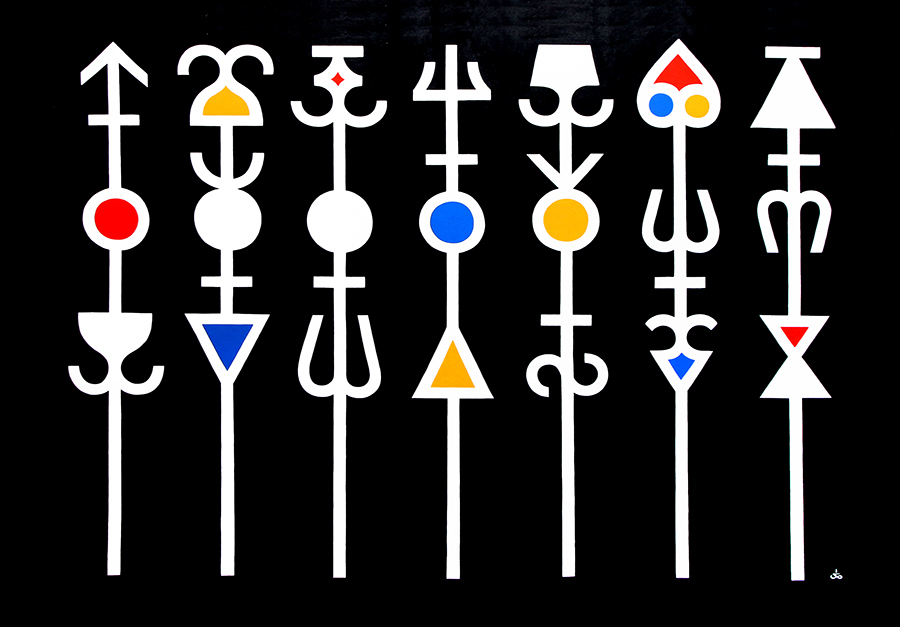 So the piece is divided is 7 columns of 3 ranges,  you might be able to read on the first one, the numbers from 1 to 7 written in mirror, then on the second line down, the symbol of the sun, and the the planets from Mercure, Venus, The Earth, Mars, Jupiter until Saturne. And finally the world «Solaire» also written with symmetry. 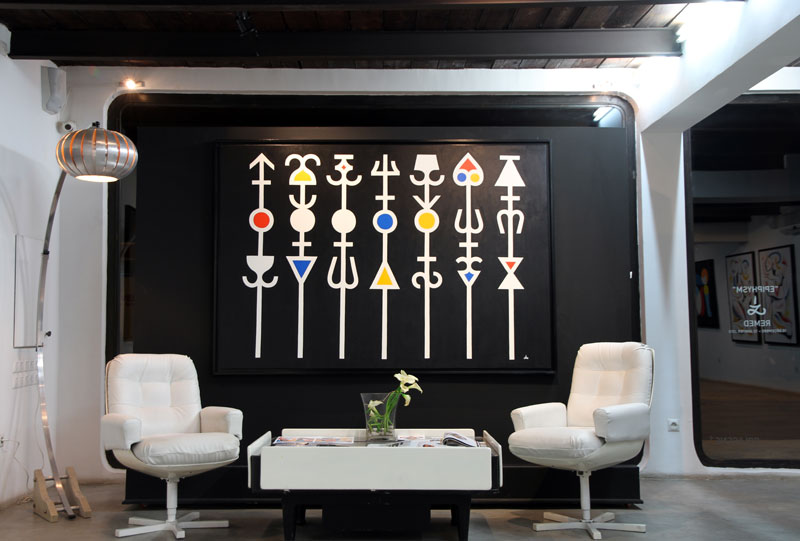 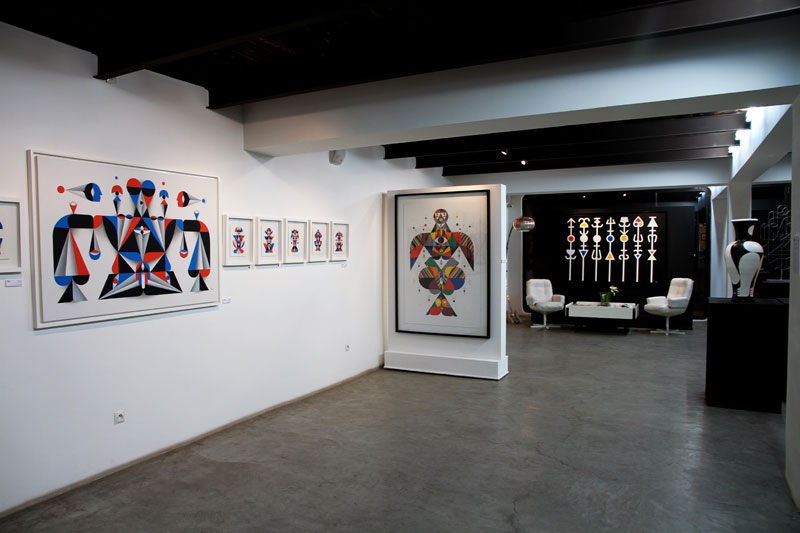 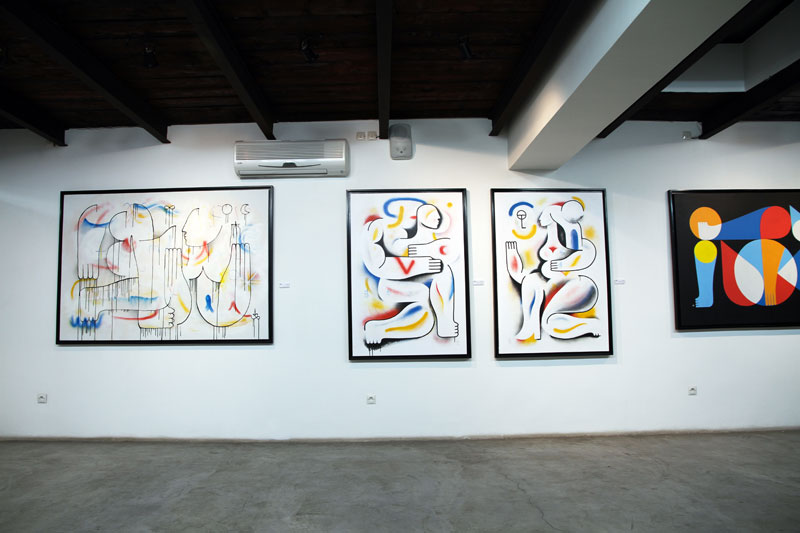 All what I did there was directly binded to my relationship with Marrakech. With the understanding and interpretation of its code. Inside the ocean of informations I received, one I most love is called «Hamsa», which means 5. It is know as the hand of Fatima, the daughter of the prohet. A symbol of protection and harmonious vibration. Sometimes there is an eye on it. You can find it in both muslim and jewish culture. And what I like from this symbol is that eventhough the symmetry is used to alter figuration, it actually look like a hand. And sometimes there s an eye on it. At the edge of abstraction and figuration, it remain universal, timeless. And i think it can convey a certain vibe in any eye staring at it.

I guess that’s why i paint it. 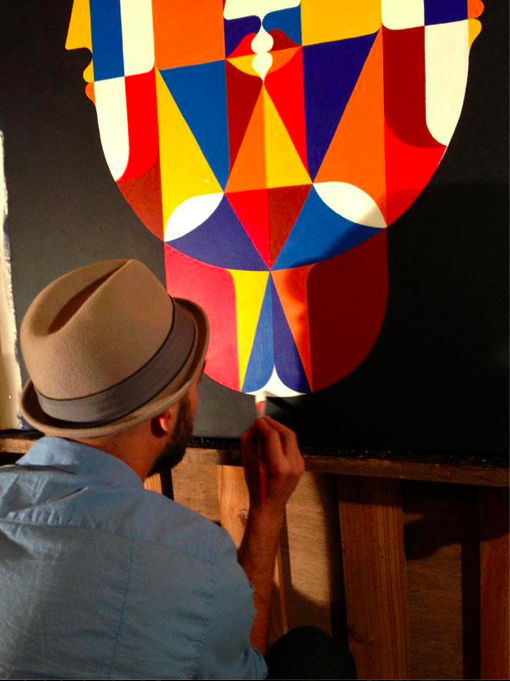 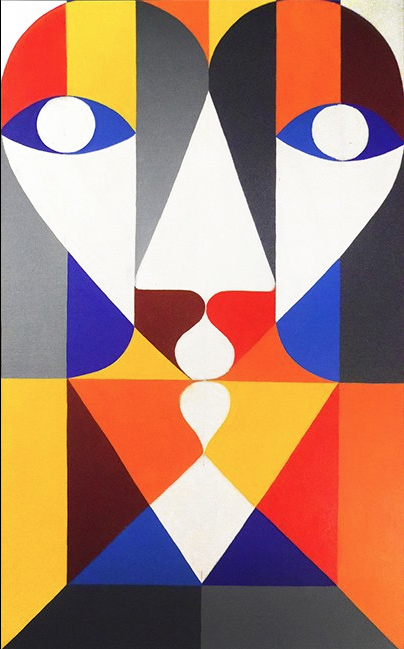 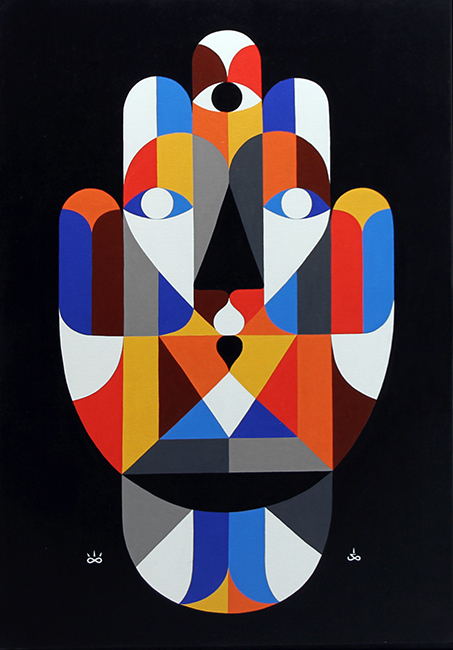 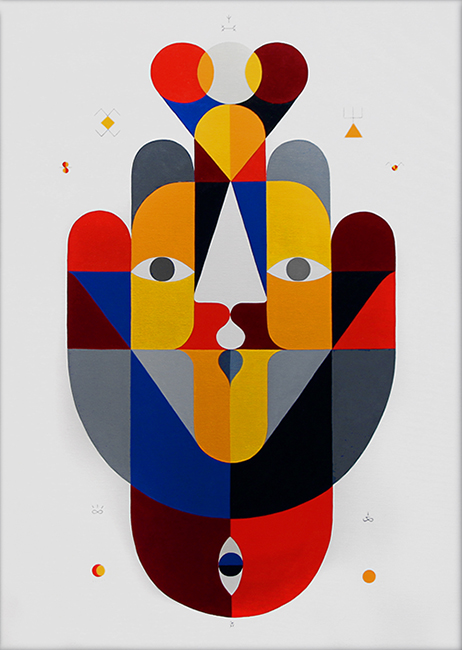 Thanks to David I got to know some great kraftworkers, and we colaborate on making a lightbox. 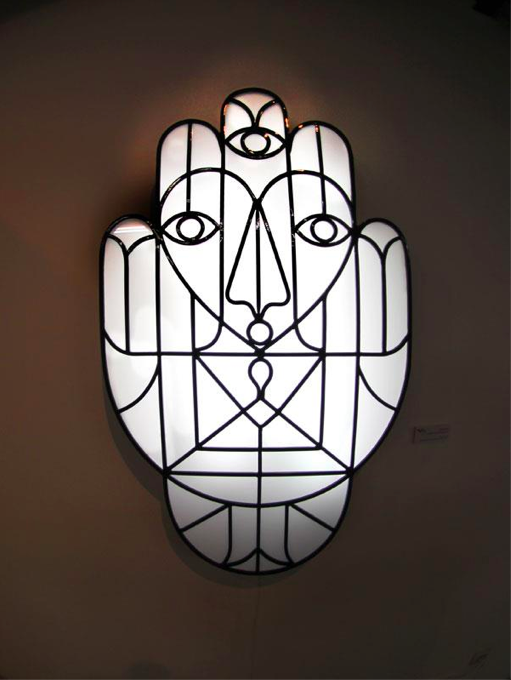 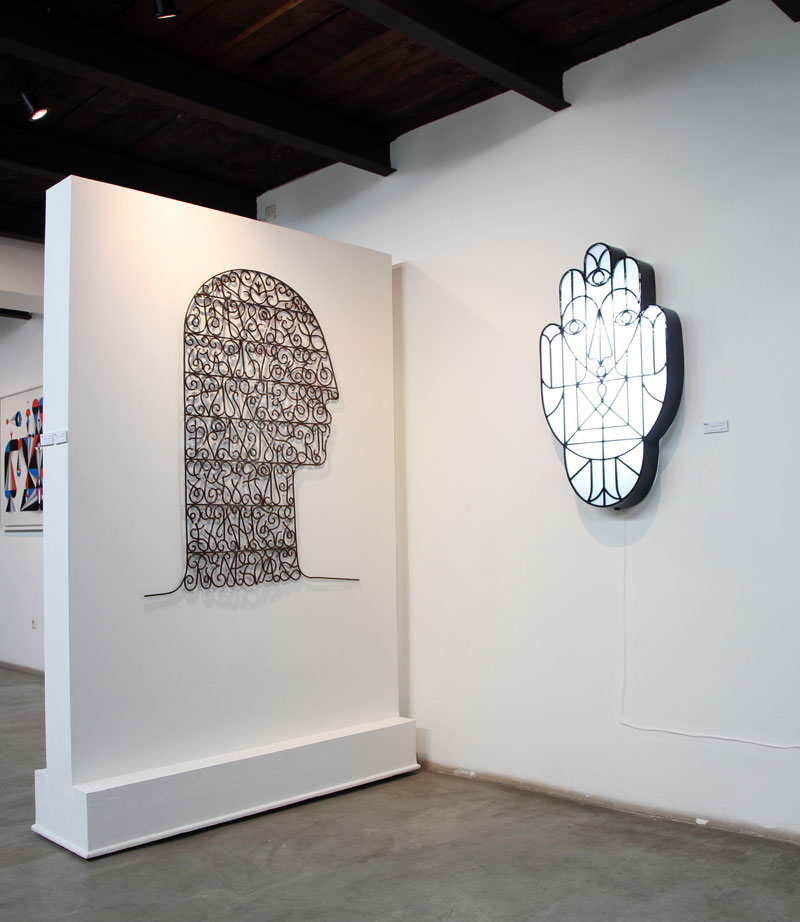 Also, it has been longtime I’ve been amazed by the beauty of spiral shaped curves riming, bringing movement to the immobile metal of marrakech’s windows. It reminded me of their calligraphy. And hopefully, the friends we knew had patience and skills to bend and weld metal in a beautiful way. So we worked together again. 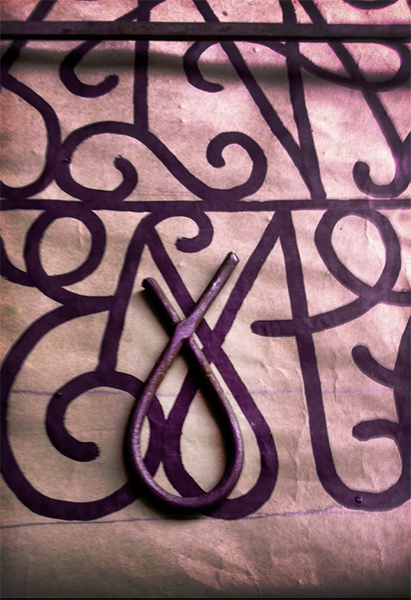 First step of working the metal.

I took a markor and started to write a poetry in the profile of a being. 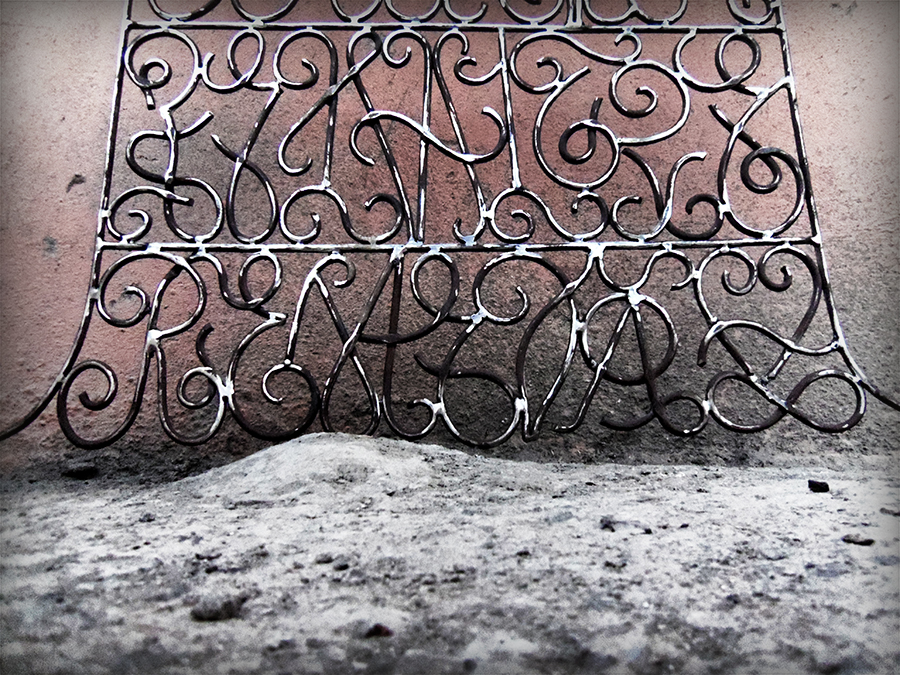 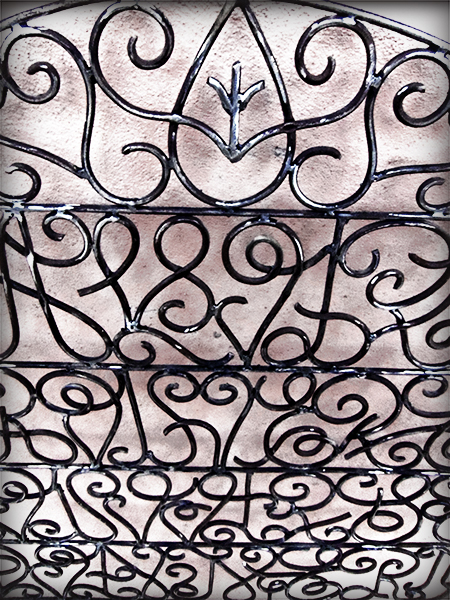 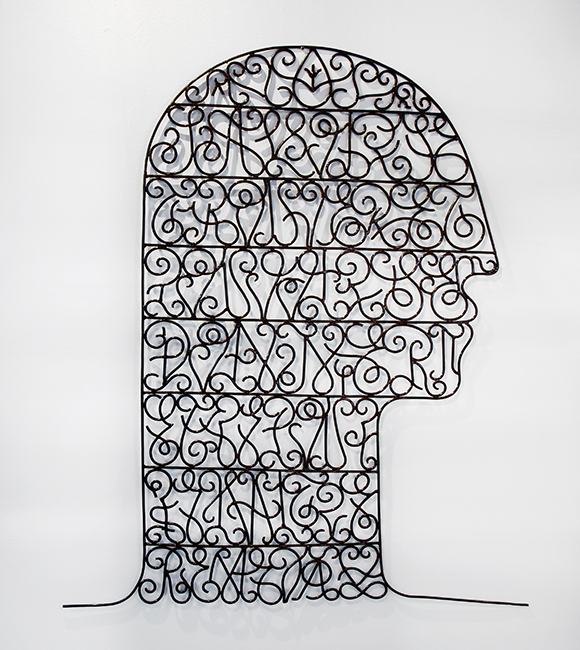 Later in the month, I came back to the language of bodies…brought me to strict simplification…the only parts that make those figurative, are its inner initial structure and the extremity of the bodies, the fingers of the arms and legs, and the nose and the lips. All the rest is pretty simplified to its most. Just to keep the feeling of an organic body.

One of the piece I did is a couple. sitting together, oarts of their bodies almost disappear, or sometimes fuse in the other body to give the sense of a unified being. Or at least potentially. 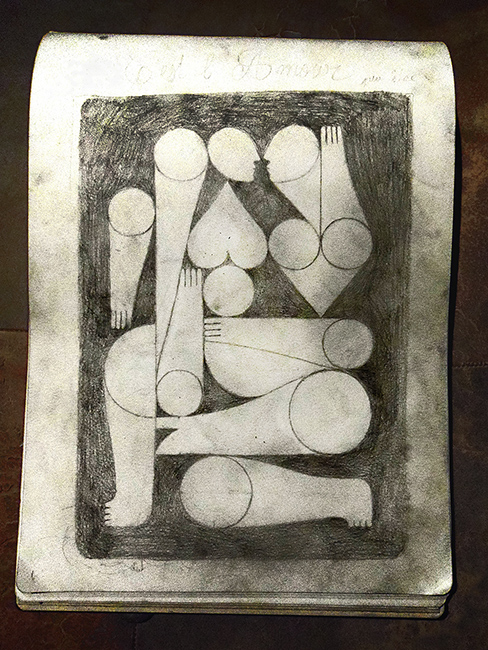 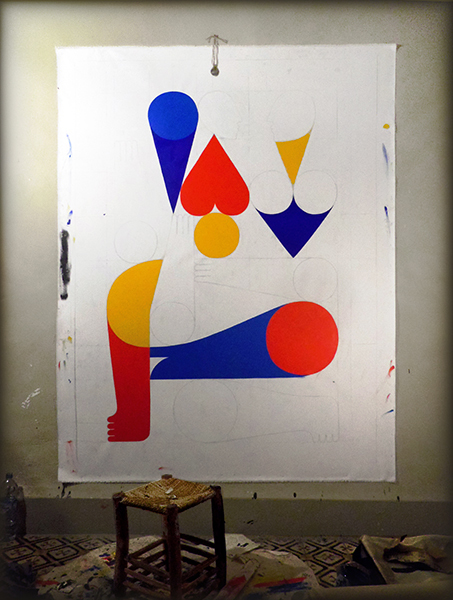 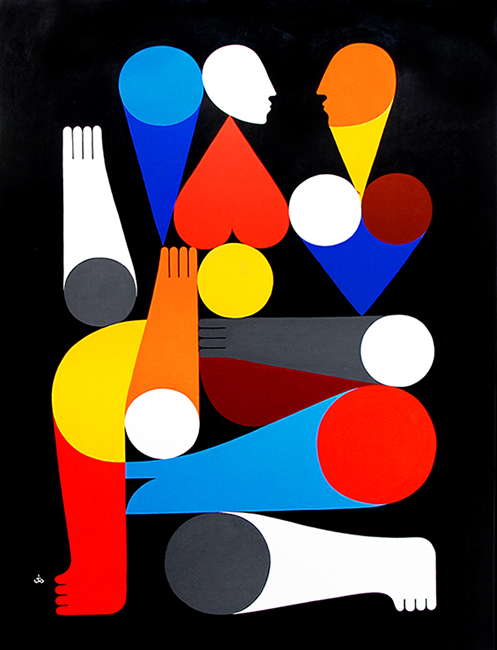 The latest canvas I did is called «FIFTH DIMENSIONAL LOVE MACHINE«. I think the format of it influence what it would be. It’s the only canvas I ever did using the Golden ratio, or Phi. I started for the first time to make a grid on the canvas, respecting these proportions. Then I started to draw, from left to write. Bodies…i wanted them to be two…But it seems that they mix with other parts of other bodies…or maybe it s their own bodies moving from one position to another, one direction to another..I don’t know..I let you feel. But I know that eventhough most parts of them are isolated, they are bound and make a global universe. I also know that there are two interlaced hearts and they looks like a sort of a motor for a body on wheels. You might see something else. 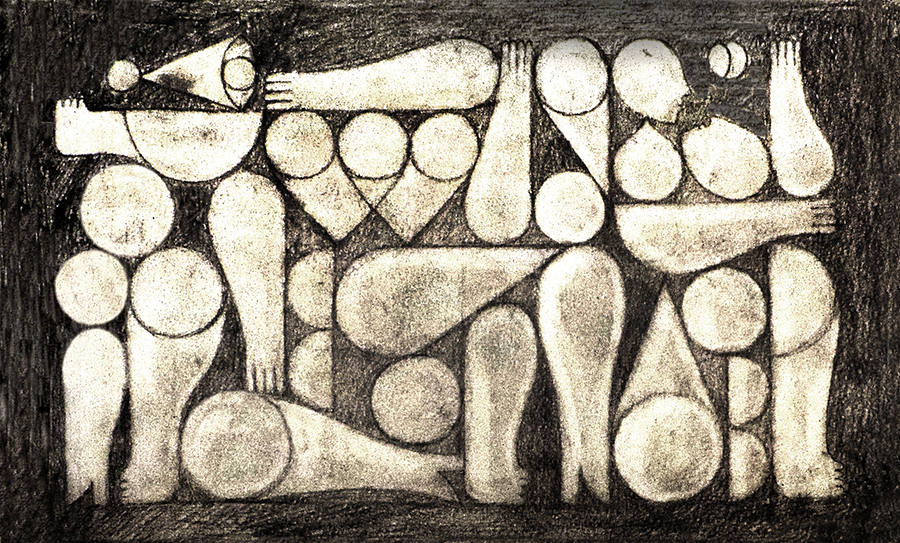 Here are a few pictures of the pieces in their exhibition environement at David Bloch Gallery. Marrakech. 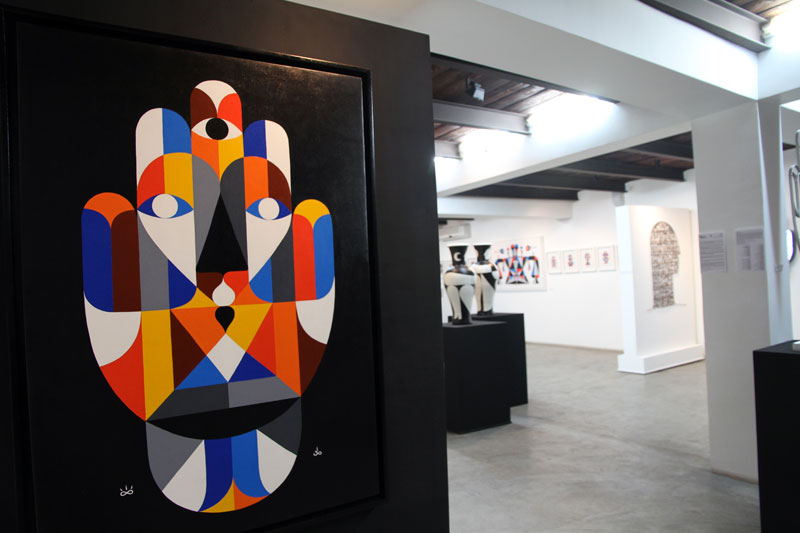 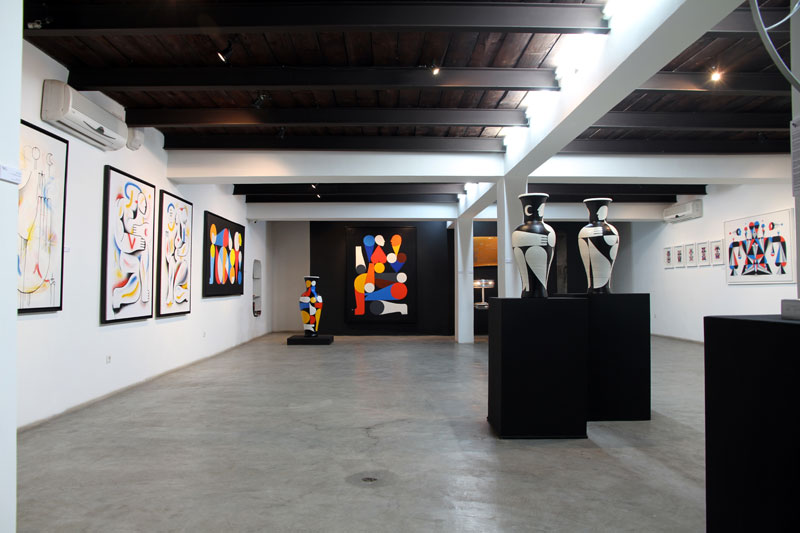 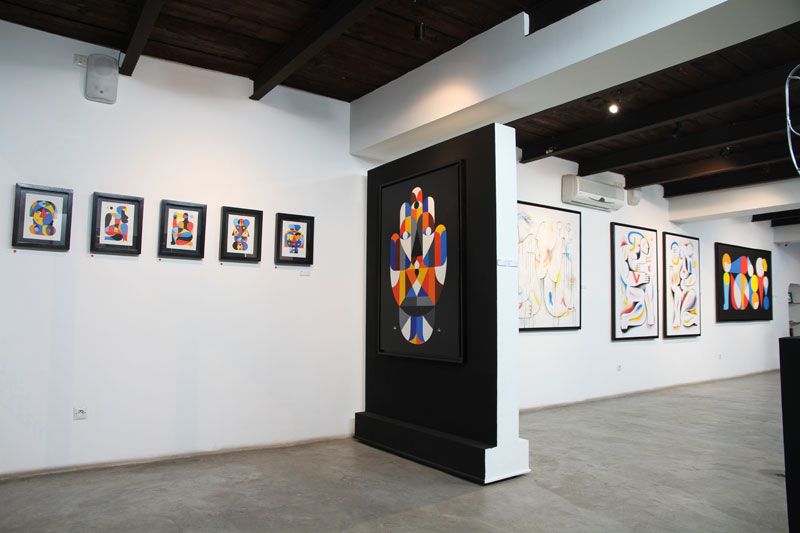 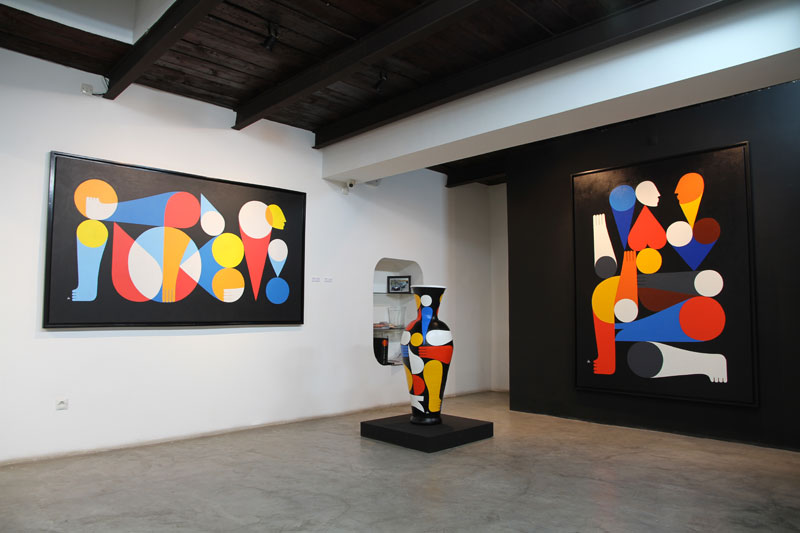 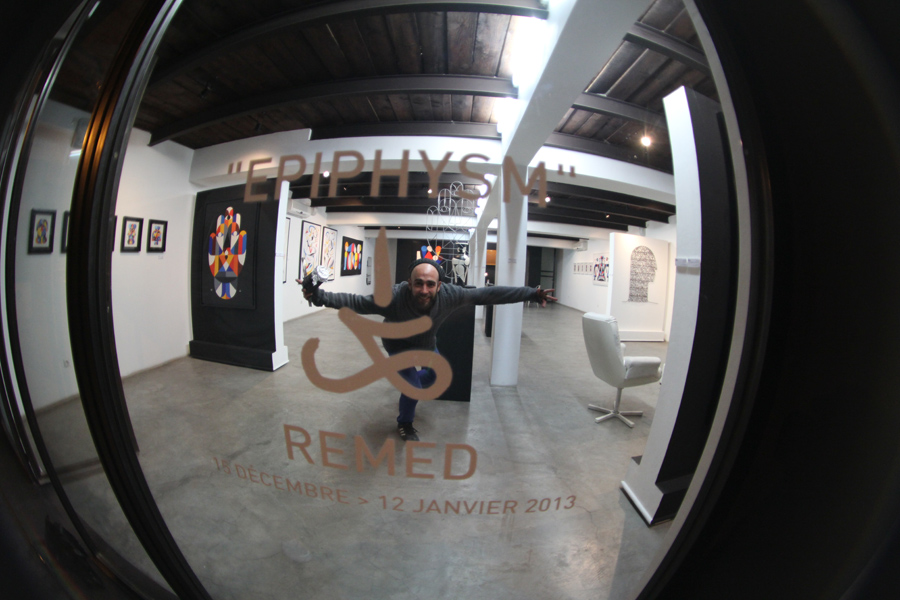 And here is the second video my WACKY BROTHERS made about the making of the show. Enjoy !