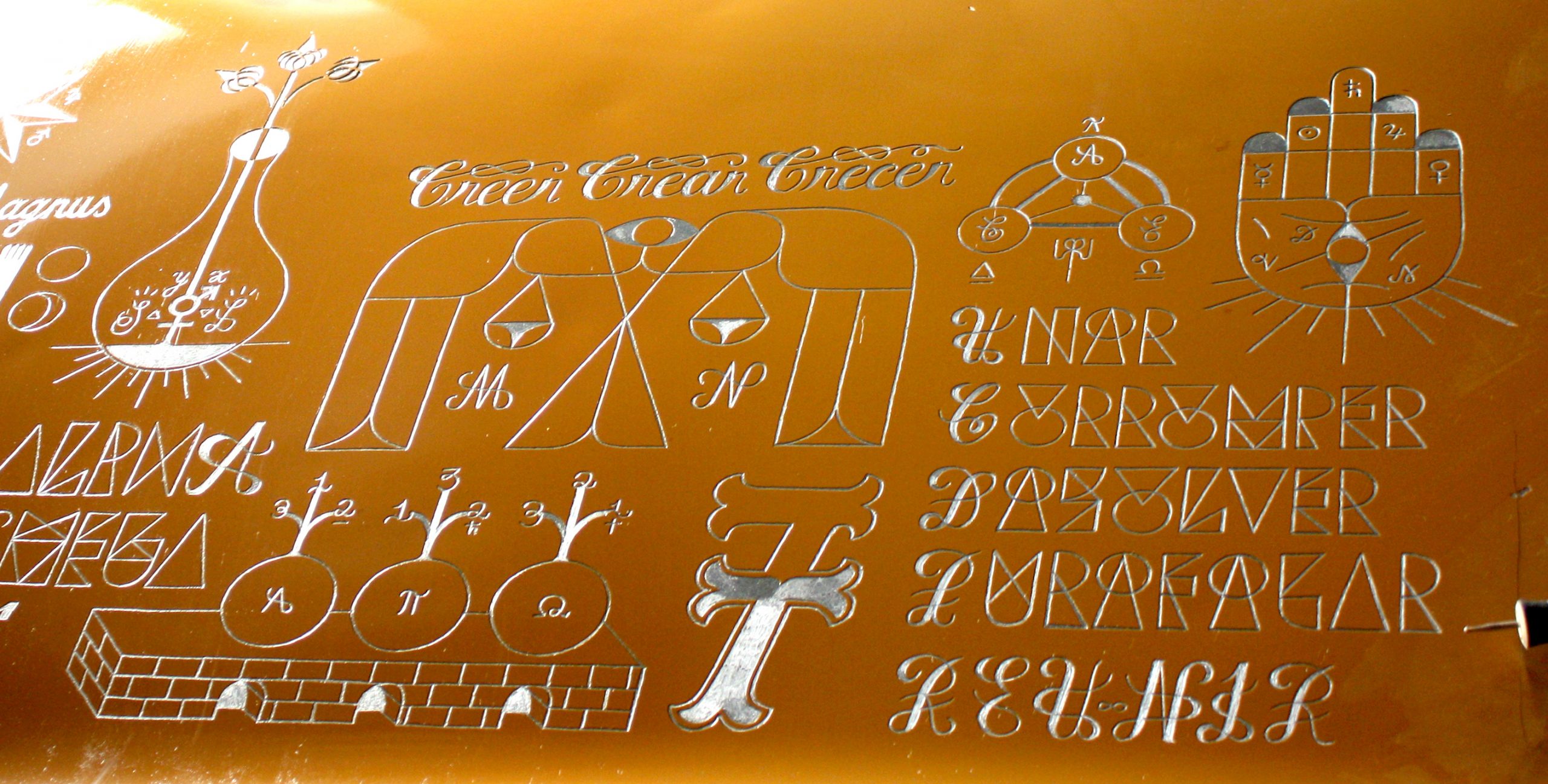 Once again, the wonderous coincidence that doesn’t exist brought me to discover and live something special. 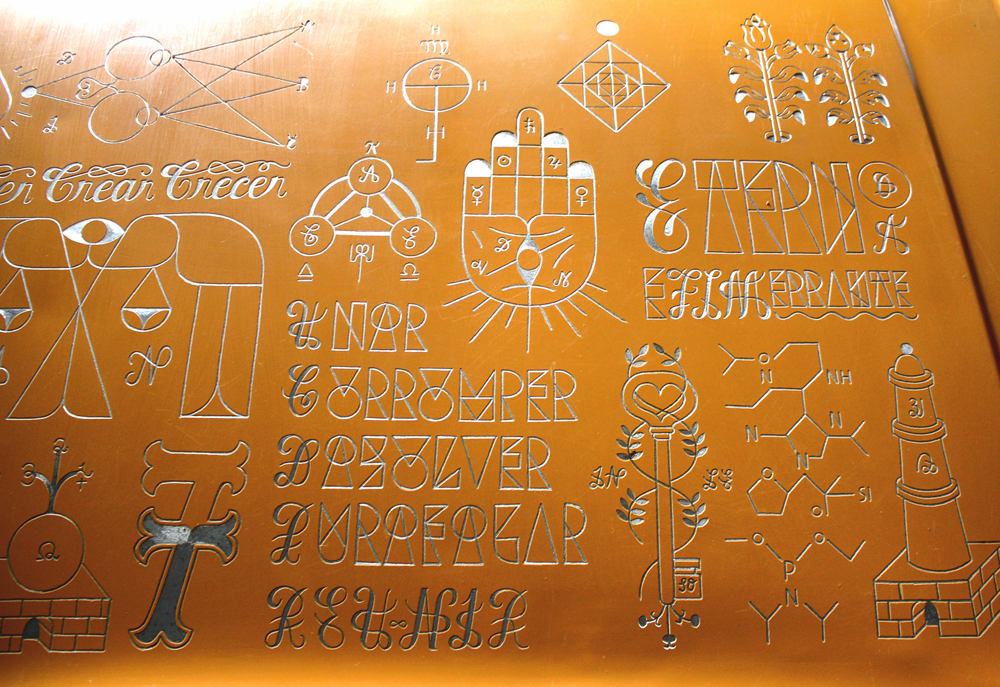 In order to build an exhibition for JUSTMAD, the main fair of Emergent Contemporary Art in Madrid, my friends from Negocios raros, offered me the opportunity to make something different. To work another material. The idea was to find some surface that is not associated to Art, but rather scribbling, or even vandalizing.

We thought about various possibilities, but the idea to work on metal stood out. I was searching for a nice soulful rusted door. I would have work on it with oil chalk, or white corrector…But we couldn’t find it.

So….I thought about a car, about people scratching them with their keys…and then imagine that it would be interesting to have a «curated» piece of Art made the same way, as it s usually vandalized. Beside that, I also like the fact to turn something industrial, soulless, into something unique, carrying a story. 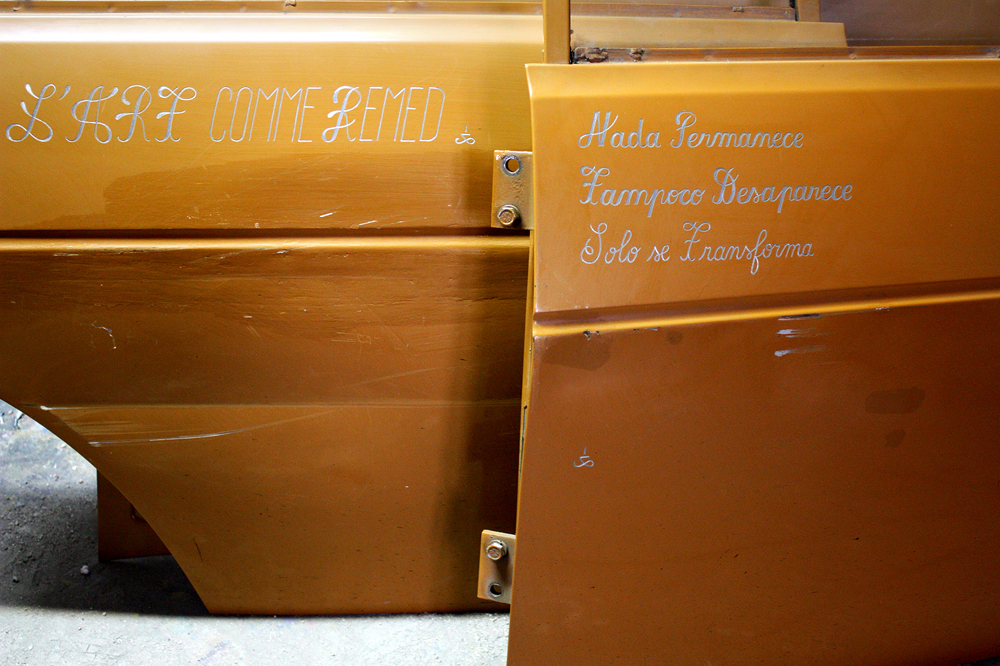 We decided to find a place where you can buy old «dead» cars, pieces by pieces. And we took the back door, and the side doors of an old orange vehicle. Maybe the oldest of the hundreds laying over there. But even though it might have been out during 12 years or more, exposed to erosion, there was no obvious story in its texture.

So we brought it home, and I started to give it some traces. To make it mutate into something alive, able to tell its story. 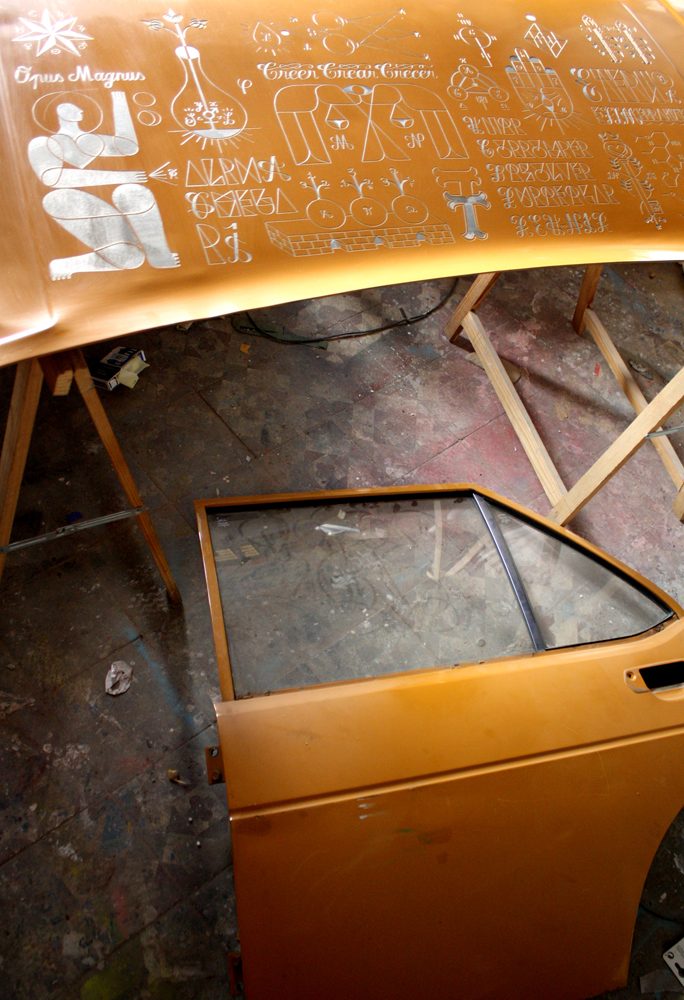 In the same time, i don’t know why,  I’ve been attracted by a book I never really dug before, about Alchemy and mysticism.

I always been interested in that issues, but I never really deeply investigated the writings about it, but rather tried to feel or guess some things. So I’ve been really happy to take the time to find some great words and ideas related by wise people. In the past, and now on.

My favorite sequence from those writings is «UNIFY, CORRUPT, DISSOLVE, PURIFY, RE-UNIFY»

I mean, it’s just life! applicable to any relation between two organic beings. Or between any organic being and its environment. Or any Soul with its body. And maybe to the Universe with itself.

Even if it sometimes frightened me, I love to think that We (including much more than human-beings) are all One, that One is all.

We are nothing and the everything. And we’ll be for ever. Stardust. In transition.

Ok.. so…I’m writing as I am thinking…i’ll start with the description of the beginning of the engraving.

The first word I wrote is «Opus Magnus» 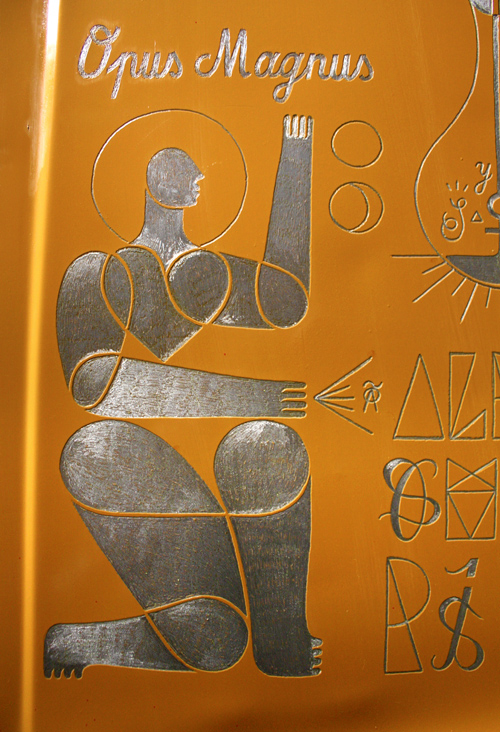 On the bottom left hand corner, there is a man, kneeling, left hand up, reaching both the moon and the sun. He’s no man, neither woman, he just «be».

over his head, there is the 7wing star, composed by seven of the planets of our galaxy. Metaphor of the 7 furnaces of the Soul.

Going out of its wright hand, there’s a symbol made of three characters I’ve blend. Alfa, Omega, and Pi. Which create a loop I believe in. Creation, destruction, and the movement in between. 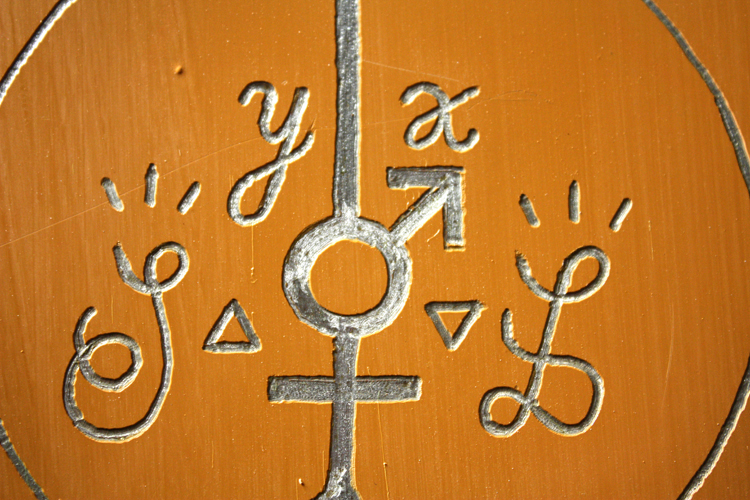 OPUS MAGNUS (Detail of the inside of the vase of an engraved old car) 2012.

Over this, there a kind of vase, inspired by an illustration I found in The «Donem Dei» (set of 12 illustrations about the Opus (XVII)

I just changed the inner symbol of it, putting the S, standing for Sun, And the the L, for Luna (moon). U can also see a plant/tree made of the juxtaposition of Mars, and Venus symbols. There are also the letters «x», and «y», referring to the human chromosome.

It refers to the «Copula«, or the unification of man and woman, to create a new androgen being. Pure. Authentic.

It is also a metaphor to the spiritual elevation. Just beside it, the symbol of the «golden number», present in any part of nature, and harmonious vision.

Then, still in the bottom, there is a furnace. Representing the process of sublimation of the Prima Materia.

This element is inspired by an illustrations from Speculum Veritatis, XVII. It describe the 7 steps of sublimation of the metals, which are much similar to the seven steps of the Copula.

On its right, the magic number 7. 7 planets, 7 metals, 7steps.The number’s feet (diagonal) touching the earth, but his head (horizontal) bound to the highest.

«Any man is free, and he is (like) his own God. In his Life, he owns the power of transform his self into Anger or Light.» Jacob Boheme, 1682. 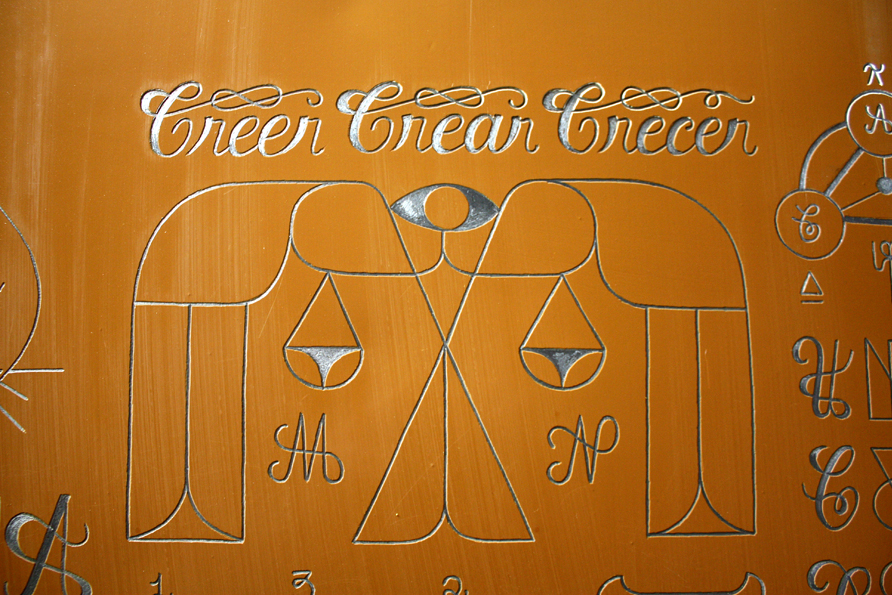 In the center of the process, I wrote this sentence, or this association of words I especially Love to use together. Because of the rime, and obviously of its meaning. «Creer, Crear, Crecer». It means «Believe, Create, Grow».

Above all, I engraved the pineal gland. A tiny part of the brain, discovered centuries ago, but forgotten from scientist during sometime, until it has been reinvestigated.

They discovered it is a vestigial organ, witness of our evolution. It as been proved that some reptile still have the rest of a third eye, closed for now… And this gland, in the human being, seems to be the «souvenir» of the third eye any beings use to have.

I guess it disappear because the surviving vision mode, is more necessary for the expansion of the race, than the spiritual vision mode. Using it can make you vulnerable in the material world.

Anyway, Science proved that this particular organ is activated when one is in state of Trans, or deep meditation, or under the effect of a drug molecule known under the name of DMT.

I represented this molecule pattern further on the engraving.

On the right of it, at the far end of the global piece, there is another visual extract from Speculum Veritatis. It is the last furnace in which the Lapis (o prima materia) obtain is tangible strength.

Back on the left of the DMT, there is a key, mixed with a symbol of the therapy of the fluid body created by Alexander von Bernus,

On the left of the key, you find the next 5 words, almighty law of the being : «Unir, Corromper, Disolver, Puraificar, Reunir.» As i wrote in the first part, It does mean, Unity, corruption, dissolution, purification, reunion( Resurection through mutation)

Upper, I have drawn a symbol, inspired by illustrations representing the Trinity. In the original visual from Cornelius Petraeus, the Trinity is made of the Sun, the Moon, and the Azote(Mercury?). In the center, the Lapis Philosophal. Or Prima Materia. In the meantime,  Chirstianity translated it into «The Father, The Son, and the Saint Spirit.»

Im my representation, I used the Body, the Spirit, and the Soul. Each one associated to Omega, Alfa, and Pi(the Movement). All are bound to each other to build the perfect Harmony. In the center of this trinity, throne the Point of birth of the once nothingness who then became the everything. 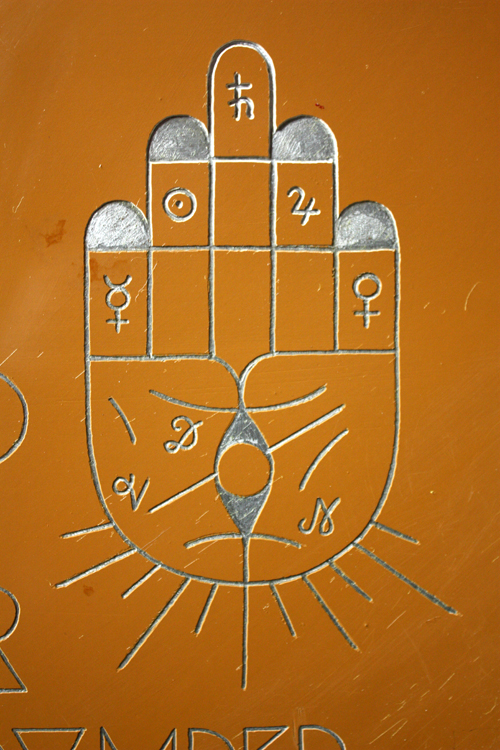 One, is the hand of fatima, ornamented by a symbol of a wise protector eye, took from arab culture. The other inspiration comes from an illustration by Johanes ab Indagine, extracted from Apostelesmaticae Introduction, published in 1556.

I represented, inside the hand, the upper line of Destiny, the diagonal of Life, and the bottom one of Nature. In the fingers, the Mercury, the Sun, Saturn,  Jupiter and Venus.

Right between this two elements, I decided to put a symbol made by the fusion of the philosophical symbol of Mercury, and the chemistry schema of Gold.

Because the idea of Alchemy is to turn the Mercury, spoiled, into the perfection of gold.

Further on the right, I drew an abstract geometry inspired by indian Mandalas.

One of the last thing I incorporated to this piece, is the association of two flowers, going out the hole of emptiness, representation of the light, and the darkness ;  the Love, and the anger ; Life, and death.

Similar flowers are seen in the illustration of Light and darkness, part of a publication of Jacob Boheme, in 1682. 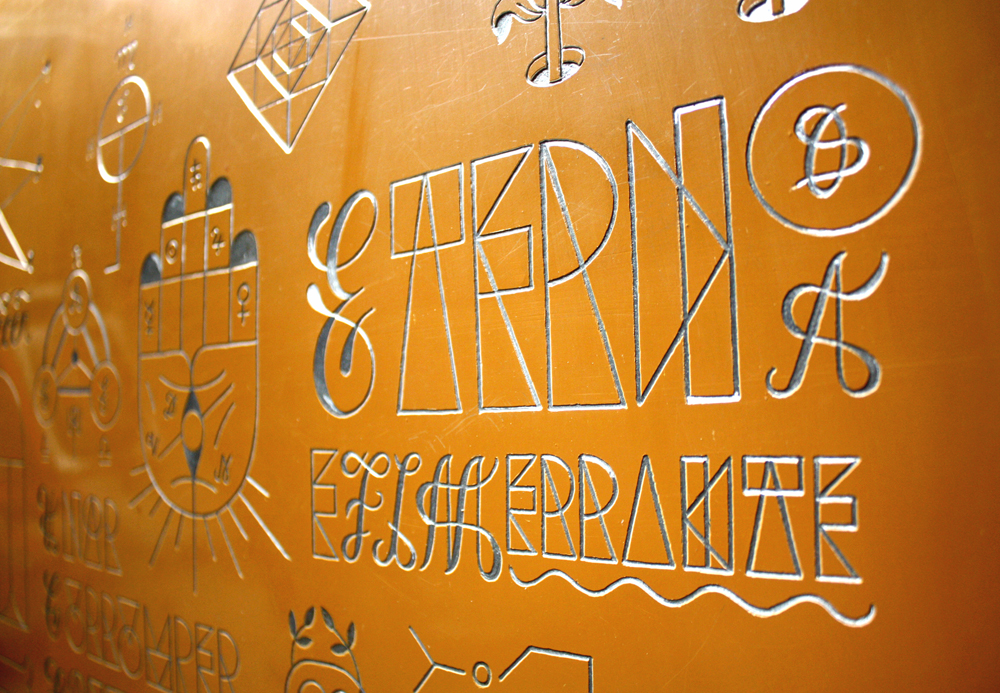 Finally, the last words of this story are a game between three spanish words.

In english, it would be something like ETERNAL EPHEMEWANDERAL*

On the other one, i wrote : «Nada Permanece, tampon desaparece, solo se trasforma.»

«Nothing is permanent, neither does it disappear, it only mutate»

I hope you enjoy the reading and looking. I wish to you and I to find our balance, to keep on our path, remaining sincere to who we are, and able to share what we think needs to be shared.